I'm a Student I'm an Educator I'm a Parent

Be a part of the greatest Queer College Conference of year, now virtual! The Queer College Conference is the only conference of its kind dedicated to addressing the barriers and adverse conditions facing LGBTQ college students and their faculty/staff advocates. Attendees will work together through expert-facilitated workshops and peer-led conversations to build the tools and community necessary for sustainable change and impact! Workshop tracks for both students and faculty/staff/community service providers ensure every attendee has the opportunity to build a network of their peers.

We have worked to make sure that this conference is even better than previous years! All workshops, including the live keynotes, will be recorded as they happen and uploaded to our virtual platform so once you register, you can watch the sessions as many times as you want! During the day of the conference, talk to presenters, exhibitors, and other students using our Discord! Join using  discord.gg/Uve4qrg to be ready for the event!

The Queer College Conference will also feature our Career Expo on February 13th, where students have the opportunity to talk with professionals from all sorts of field to make connections to help with future careers! With our virtual platform, we ensure that students will be able to have live virtual meetings with our exhibitors, getting the information and networking you need from employers from around the Midwest!

Download the poster below to hang at your school!

Schuyler is the first trans athlete to compete in any sport on an NCAA D1 men’s team, and the only to have competed for all four years. He is an internationally-celebrated inspirational speaker and a respected advocate for inclusion, body-positivity, and mental health awareness.

Schuyler graduated from Harvard College in May 2019 with a degree in Cognitive Neuroscience and Evolutionary Psychology. His studies focused on social emotional learning, emotional intelligence, and education. He is a tireless advocate for inclusion through speaking engagements and social media. Schuyler also holds on-going advisory roles with Monte Nido & Affiliates (the leading eating disorder treatment provider), Plume Healthcare (the first trans-specific healthcare provider) and American Eagle Outfitters (the AExME advisory council) and is a research assistant at Harvard University.

At the Queer College Conference students will have the opportunity to hear Schuyler’s story as well as ask him questions in a live session!

Hey y’all, I’m Dixie Longate. Originally from Mobile, Alabama, I started selling Tupperware as one of the conditions of my parole. I did my first party, had so much fun and got free drinks from the host so I knew this was a job for me.
In 2007, I took my party out of the living room and onto the stage with an off-Broadway production of “Dixie’s Tupperware Party.” After sharing a little southern charm with the northerners in NY, I took my show on the road. In 2008, I started taking my party from city to city and, up until corona happened, I had been running for 12 years in 5 different countries and had become one of the longest-running off-Broadway tours in history. Now I am helping people with their food storage needs from the comfort of my trailer when I can get my dang kids out of the way.

I’m here to share some giggles, some stories and the very best of those air-tight containers that your momma still uses after all these years. I’ll make your heart a little bigger and your food a little fresher. Trust me when I say, this ain’t your grandma’s Tupperware party.

Registration will grant you access to our virtual platform which will host the workshops, keynotes, and career expo

All registrations are nonrefundable. The conference will be held virtually. Registrations can be transferred to a different name for those who cannot attend. Payment can be made with a check or PO.  In order to pay with a check or PO please call us at 515-381-0588 or email info@iowasafeschools.org with number of participants and additional details, and an invoice will be made for you.

If you are interested in paying with a check or PO, please call our office at 515-381-0588. Please note that a credit card must be given at the time of registration if paying with a check or PO to reserve the desired headcount. No charge will be made to the card on file, provided that payment by check is received by February 1st. It is the responsibility of the reserving party to ensure that payments are received by Iowa Safe Schools. All registrations are final and no refunds will be given.  Payment must be received by the date of the Conference.

Details: Exhibitor booth will be up virtually throughout the conference and can host text based information, contacts, and videos. For the College and Career Expo on February 13th, we require at least 1 staff person to be available from 10am-3pm to be in a Zoom where they can talk with students 1 on 1. Once you register, you will be sent a detailed description of how to navigate our platforms.

Refunds: All registrations are nonrefundable. Registrations can be transferred to a different name for those who cannot attend. Payment can be made with a check or PO.  In order to pay with a check or PO please call us at 515-381-0588 or email info@iowasafeschools.org with number of participants and additional details, and an invoice will be made for you.

Exhibitors are given one (1) complimentary registration with the purchase of an exhibitor spot. Once your application is submitted and approved, your exhibitor spot is considered attending and any balance remaining must be paid in full. No refunds or cancellations will be offered.

Visit our Sched to see each session and read their descriptions to learn more: https://queercollegeconferencesched.sched.com 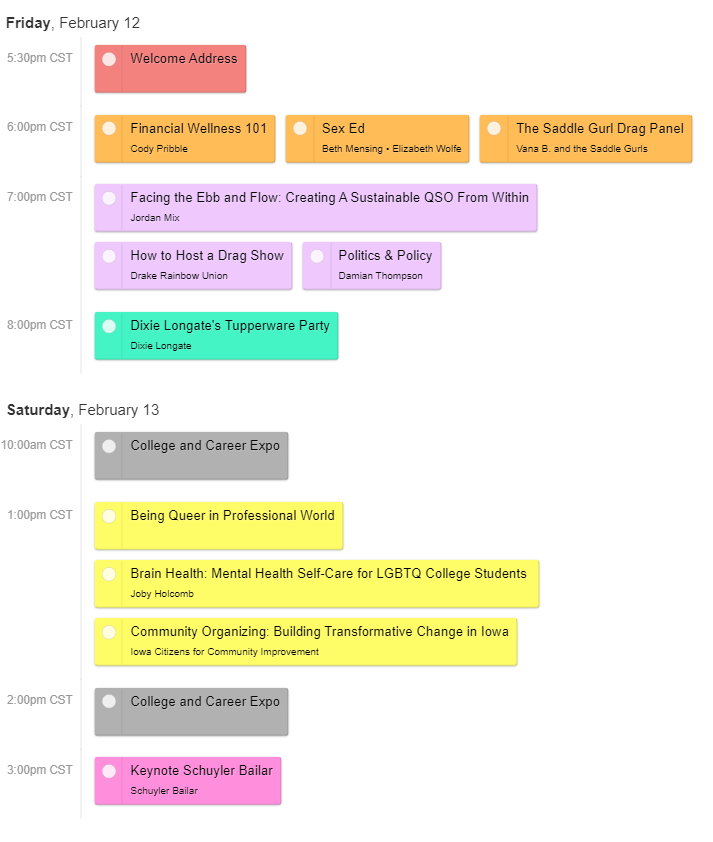