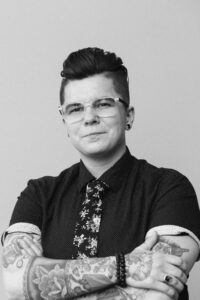 Becky Smith (She/Her/Hers) is the Executive Director of Iowa Safe Schools. She has spent most of her career in direct service of LGBTQ youth across Iowa and is excited to be stepping back into the work that Iowa Safe Schools is doing statewide.

Becky holds both her bachelor’s and master’s degrees in social work, with an emphasis in cultural competency when working with marginalized populations, as well as grassroots organizing. She is inspired by the incredible work being done by young people across the state in GSAs and QSOs. Becky is especially interested in helping students and young people use their voice to create positive change in their communities through youth activism and advocacy efforts.

When not connecting with community partners or supporting the work of the team at Iowa Safe Schools, Becky spends her time liking photos of cats on Instagram and sipping on cold brew coffee from Starbucks.

To connect with Becky, please send an email to becky@iowasafeschools.org. 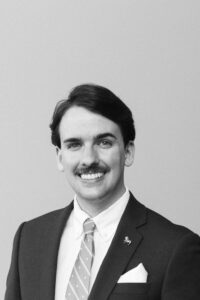 Damian Thompson (He/Him/His) is the Director of Public Policy and Communication at Iowa Safe Schools. Damian has been with Iowa Safe Schools since 2019. During his time at Iowa Safe Schools, Damian has spearheaded the organization’s lobbying efforts at the local, state, and federal levels. He also serves as the organization’s spokesperson for local and national news outlets and leads Iowa Safe Schools’ fundraising efforts. Before then, Damian worked in the Office of Governor Kim Reynolds overseeing constituent communication and proclamation requests. He also worked at a bipartisan government affairs and public relations firm in Des Moines. Damian graduated cum laude from Drake University in 2017 with his Bachelor of Arts in Law, Politics, & Society.

To connect with Damian, please send an email to damian@iowasafeschools.org. 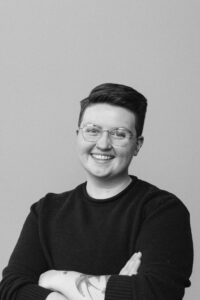 Jordan Mix (they/them) is the Director of Educational Programming at Iowa Safe Schools. They graduated from Drake University in 2016 with degrees in Law, Politics, and Society; Sociology; and Women and Gender Studies. While at Drake they were the president of Drake’s LGBTQ organization, Rainbow Union, helped establish the first all-gender bathroom on campus, and collaborated heavily in writing Drake’s Transgender Inclusion Statement. Jordan also completed their graduate studies in Gender and Sexuality Studies at the University of North Carolina Charlotte.

In 2019, Jordan was the head curator of a project called Breathe, Learn, Act — the first ever virtual care package for parents and loved ones of transgender and non-binary kids. Jordan joined the Iowa Safe Schools team in March of 2020, where they work with K-12 educators to develop LGBTQ-Inclusive curriculum, facilitate an online academy for Iowa’s K-12 educators, and lead training sessions for students, educators, and other community members.

When they’re not working, you can find Jordan hiking with their wife, cheering on the U.S. Women’s National Soccer Team with their cat, and honing their home barista skills.

To connect with Jordan, please send an email to jordan@iowasafeschools.org. 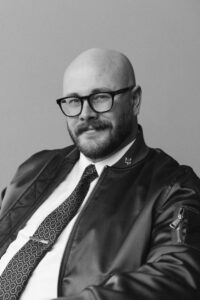 Mark Turnage (He, Him, His) is the Registrar & Office Manager for Iowa Safe Schools. He coordinates everything, from transcripts to technical support for participants of the Safe Schools Academy, to registration for the annual Governor’s Conference on LGBTQ Youth. Mark graduated from the University of Northern Iowa and has been involved in community events and advocacy-related fundraising since moving to Des Moines in 2011.

You can always find Mark at the midnight premiere of the latest Batman film, curating his comic book collection, playing the latest Metal Gear videogame, indulging his inner film geek, or working on writing the next great Batman story. 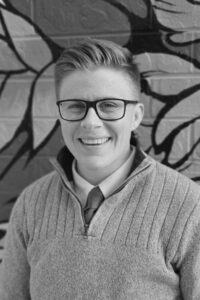 Dana Van Renterghem (She/Her/Hers) joins the Iowa Safe Schools team as the Parent & Family Coordinator. Dana graduated from Central College with a bachelor’s degree in sociology, and a minor in communication studies.

Since graduation, she has spent most of her career working with at-risk youth in a multitude of roles. Dana has provided direct care to teenagers in multiple residential settings, supported families in reunification and permanency efforts while involved with the Department of Human Services, and advocated for LGBTQ youth in a previous role as GSA Coordinator with Iowa Safe Schools. She has a passion for helping youth grow as individuals while reconnecting with loved ones who have been estranged. Dana strongly believes in the power of human relationships and empathy, and finds joy in seeing others reach their full potential.

Dana is currently enrolled at the University of Denver and has begun the journey of earning her MSW. In her spare time, Dana enjoys nothing more than being an aunt to her nieces and nephews. When she isn’t with her family or friends, Dana can be found at the gym, re-watching shows from her childhood, or enjoying the outdoors.

To connect with Dana, please send an email to dana@iowasafeschools.org.

Hannah Mitchell (She/They) is the GSA coordinator at Iowa Safe Schools. She is a recent graduate of the University of Iowa where she majored in Gender, Women, Sexuality Studies; Social Justice; Social Work and minored in Human Relations. At the University of Iowa Hannah worked at the Women’s Resource and Action Center as a Certified Peer Educator, led the University of Iowa’s LGBTQ+ based sorority (Gamma Rho Lambda), and culminated her undergraduate education with a capstone exploring the interactions between University administration and queer Greek student organizations.

Hannah first crossed paths with Iowa Safe Schools as a high school student herself and returned as a Pride Camp counselor. They’re excited to make it a threepeat as the GSA coordinator.

Outside of work, Hannah spends her time babying her cat son Francis, watching A24 movies, and experimenting with punch needling.

To connect with Hannah, please send an email to hannah@iowasafeschools.org.