The mission of Iowa Safe Schools is to provide safe, supportive, and nurturing learning environments and communities for LGBTQ and allied youth through education, outreach, advocacy, and direct services. 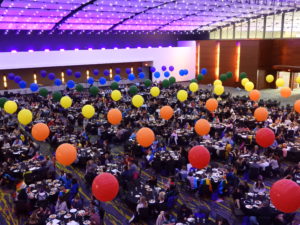 All students need a safe, supportive atmosphere in which they can learn, including students that are lesbian, gay, bisexual, transgender, queer or questioning (LGBTQ).  Unfortunately, bullying, harassment, and discrimination against LGBTQ students occurs often in our schools.  In fact, 82% of transgender youth report that they feel unsafe at school1 and 74.1% of LGBTQ students were verbally bullied in the past year because of their sexual orientation2. As these students face verbal and physical harassment, educators, policy makers, parents, and other students are often hampered by the lack of quality information and resources to protect LGBTQ students. 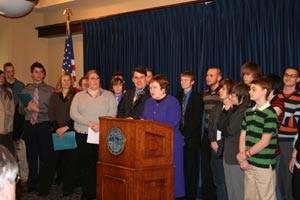 Iowa has made significant progress in helping create safer schools for LGBT students.  In 2007, Iowa became the 10th state in the nation to pass a comprehensive Safe Schools Law that protects ALL students. Including the Safe Schools Law was the extension of the Civil Rights law which protects LGBTQ school staff members from discrimination.  Governor Culver, Lt. Governor Judge, and legislative leaders all made historic passage of these laws a reality.

The fight for the Safe Schools Law was not an easy battle. Founded in 2002, Iowa Safe Schools worked for five years by hosting community forums across the state and talking to leaders one on one about the importance of protecting all students.  These forums led to movements in many Iowa communities to pass protections on the basis of sexual orientation and gender identity.

After years lobbying in the Iowa Legislature to pass this important bill, Governor Culver and Lt. Governor Judge made it a priority in their first two months in office to pass.  With their help and that of floor managers State Representative Roger Wendt and State Senator Mike Connolly – the Safe Schools Law became a reality.  The bipartisan vote on SF 61 made protecting students in schools not only an ethical, professional, and moral obligation – but a legal one.

In Fall 2016, Iowa Safe Schools launched this GSA Network program, with the mission of empowering students to create safe spaces in Iowa schools through youth activism and community support. It is designed to provide resources and support to LGBTQ and allied students in Iowa, as well as educators and GSA advisors. The Network connects GSAs across the state, and assist students interested in starting a GSA get their group off the ground.

In Spring 2017, we launched the Queer Campus Coalition, with the mission of supporting LGBTQ students pursuing post-secondary education in Iowa. By communicating, growing, and advocating together, we can make institutional changes that lead to better and safer worlds for all students.

In Summer 2018, Iowa Safe Schools hosted Pride Camp for the first time, the only LGBTQ youth summer camp of its kind in the Midwest. Read more about Pride Camp!

Laws, however, are only good if enforcement and education follows. Work remains to be done to protect all students from bullying, harassment, and discrimination. Be a part of the work we are doing to #ProtectKidsStopBullying!